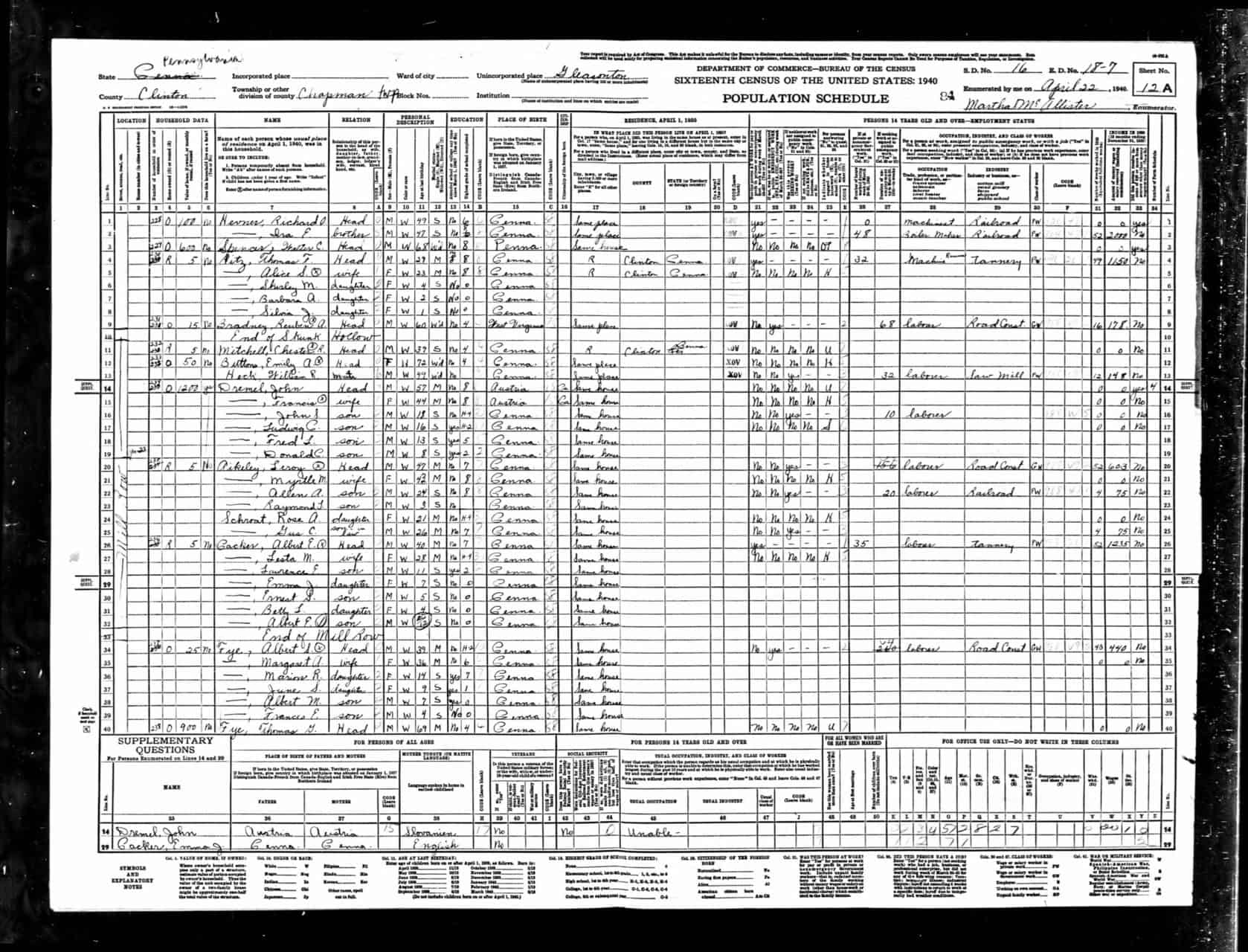 Image of the family documented In an early census. Trust me, it's on there...

So, let me tell you about my grandmother. My father’s mother in this case. She was a mail-order bride from Austria who left the old country with instructions to, “Meet this man, marry him, and have his children.” At least, that’s the story I recall being told. She was mother to four boys, one of whom was obviously my dad. When I was young, we would travel 100 miles every weekend to be with the family. When not hanging out with my cousin Ronnie, my time was split between the homes of the two grandmothers. In both homes, food was a VERY big thing. I recall lots of the foods that this particular grandmother used to make; some of them I on occasion try to replicate. One particular dish was her Depression version of spaghetti. It went something like this:

Fill a medium sized sauce pan about two thirds full of water. Add to this half an onion, a stalk of celery, a nice sized chunk of lard, a lot of ground red pepper and a bottle of Ketchup. Heat it up until it comes to a boil. Add spaghetti to this and cook it until the spaghetti absorbs most of the liquid and becomes the sauce. Remove the onion and celery. Serve and eat.

Now, I am sure that there are many who find this unappetizing, to say the least. That’s fine, as this is not a high art type of recipe. This is food that was developed during the Great Depression to feed a hungry family on next to no money. It filled the stomach and was pretty good as far as I was concerned. This was also something my dad would make for me during these weekend trips when he was there to care for his sick mother during her last days. It’s a food that symbolizes that branch of the family to me. A foundation for my sense of what tasted good, and what good cooking was about.

Flavor, technique, presentation are all part of what makes food good. Classic technical cuisine is classic because it hit all three of these marks. At the same time, there is a lot to be said about the food that raised us up. It might not have even registered high on any of the classic parameters, but it was what moved us through our history. In many ways, food is a marker of our history. It’s the stuff that was there as we became who we are now. The foods we had as kids sets the bar for understanding what’s good and what’s not in our culinary lives. Our cultural norms when it comes to food impact our choices, much like family and cultural norms impact our personal experience. We may move on from them, but they are the bedrock from which we arise.

So, try the spaghetti or not. For me, it’s a meal of memories that occasionally needs to be indulged. We all have our own foods of the family. What are yours? They may be simple, and they may even be, as one member of the clan is fond of saying, a “not so much,” type of experience. They are part of our history, and in their own way deserve the same reverence as anything that comes from a gourmet kitchen.

On Becoming a Cracker Nerd and the Cracker Spectrum

Tasting: Or What Causes Our Mouth To Do The Happy Dance?